Ulrich and Judith has been visiting OFF – Odense International Film Festival for decades. This year, at OFF20, they couldn’t participate in the festival in Odense due to COVID-19, but luckily OFF had a digital festival as well. Here is their experience with OFF20 – the digital festival:

Odense International Film Festival has been a part of our DNA since 1979. For two people, who spend their long work life either at a school or in a cinema, this festival, this celebration of films, is just very special. It is where you have been able to meet the odd and the different, the ground breaking and some times incomprehensible. We have been along for the whole ride, from OFF being a pure animation festival to also featuring international adventurous short films to the current edition with Academy Award-qualifications in both the international main competition, animation competition, the documentary competition and the Danish competition. Now with a well defined duration limit on 30 minutes. And with the amazing brand OFF, of course. To us, OFF rhymes with GOD.

The Covid-19 stopped our serial participation at the festival, and 2020 became the first year where we couldn’t embrace Odense and OFF physically. But we weren’t the ones to cheat our selves from experience rare gems from all over the world. In our isolation on Møn, far far away from Odense, we listened to Carl Nielsen every morning and come the afternoon we dressed up in our red OFF t-shirts and watched three to four OFF20 programs on OFFstream. We’d spend every evening fighting over which movie was the winner of the day – we made a special rating system, where five stars where awarded to the brilliant and zero to the not so great, but there were zero zeros giving.

It was an intense, matter-of-fact and exciting week with new experiences, analysis and discussions. OFF is a life style and a meditative state. She is beautiful and able to be enjoyed at a distance. But of course she needs to be embraces and shook, she needs to be squeezed tightly and kissed the correct surroundings in Odense with parties, glitter, fellowships, gatherings. That damn Corona. But the devine OFF is not something that Satan will ever be able to shut down.

Submission for OFF21 is open! 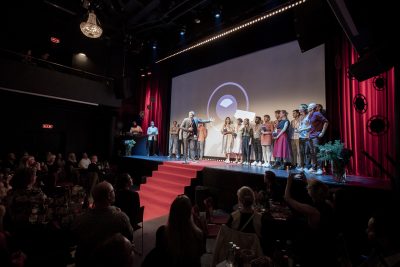