OFF19 is here! And our six amazing juries are ready to award 13 lucky films at the award ceremony Saturday during the festival. The jury members’ collective resume stretches across all fields of filmmaking and art – meet them all right here!

Director Zinnini Elkington has been emphasized by film magazines EKKO and Soundvenue as the talent to keep an eye on. In 2017 her pastel-punk teen-comedy Rainbow Girls was shortlisted for a Danish Robert Award, in 2018 she premiered the ambitious eco sci-fi Gaia and won the annual pitching competition at OFF with the dark fantasy short The Changeling, which is now in development.

Kim Fupz Aakeson, born 1958, is an author and screenwriter, known for his children’s books, novels and films. His most recent work includes the screenplay for Young Astrid (2018) in collaboration with director Pernille Fischer Christensen.

Wahid Sui Mahmoud is an actor, screenwriter and graduate of The Danish National School of Performing Arts. In 2010 he had his on-stage debut at the Royal Danish Theatre and has since appeared in major Danish theatre and television productions such as Udvandrerne (2018) and Bedrag III (2019).

Gabe Van Amburgh is a Film Programmer and the Film Exhibition Manager for SXSW in Austin, Texas. Since 2011 he has directed all aspects of exhibition including film print traffic, theatre build outs, the transition to 100% digital DCP exhibition. Previously, Van Amburgh worked for seven years in technical roles at the Alamo Drafthouse, SXSW and Fantastic Film Fest.

Carsten Bjørnlund is an actor and graduate of The Danish National School of Performing Arts. He made his debut in the stage version of Thomas Vinterberg’s Festen and has since appeared in major Danish television series such as Forbrydelsen II, Rita, Arvingerne, and Liberty and recently starred in sci-fi drama QEDA (2017).

Lotte Svendsen is a screenwriter, actor and director and a 1995 graduate from The National Film School of Denmark. Her breakthrough came in 1997 with the award-winning short film Royal Blues and she went on to create the critically acclaimed children’s television series Max, now an international film franchise. Lotte Svendsen is currently a film consultant at the Danish Film Institute.

Christen Bach is a Danish animation director and artist currently living in Berlin, Germany. Working in both analogue and digital media, his personal work mainly focuses on human relations – often told through experimental or stylistic animation – using the absurd or the surreal to highlight emotional expression.

Marianne Eskebæk Larsen is a professor in Modern Culture and Cultural Communication at KP, teaching and supervising in the intersecting fields of language, children’s literature and digital culture. She is also the author of several textbooks.

Amid Amidi is the Publisher and Editor-in-Chief of CartoonBrew.com, a leading animation industry news resource that recently marked its 15th year of publication. He is the author of numerous books including Cartoon Modern: Style and Design in Fifties Animation, winner of the 2007 Theatre Library Association Award, and The Art of Pixar Short Films. He lives in Montréal.

Andreas Kofoed, born 1979, is a documentary filmmaker and 2009 graduate of The National Film School of Denmark. He has directed several internationally distributed and award-winning documentaries, including Ballroom Dancer (2011) and Et Hjem I Verden (2015).

Mette Hoffmann Meyer is the CEO and co-founder of THE WHY Foundation; a non-profit organization that produces and distributes documentaries about human rights and sustainable development, reaching hundreds of millions of people across the globe. Selected works: Why Women? (2016), Why Slavery? (2018).

Maya Albana is a 2007 graduate of The National Film School of Denmark in Television directing. She has been the screenwriter, director and/or director of photography for several screen and television documentaries, most recently Det Sorte Kapitel (2018) and Balletskolen (2019).

8.A. From Munkebjergskolen in Odense would like you all to know that they are thrilled and full of anticipation as they face the important task of judging the films in this year’s Youth Competition. They look forward to their shared responsibility and promise to be fair, constructive – and to have a wonderful time!

Award-winning animator Sara Koppel has more than 30 years of experience in feature and short films, commercials, storyboard and character design. In 2002 she founded her own animation studio, Koppel Animation, where she makes hand-drawn animations with complete creative freedom.

Christian Tafdrup studied acting at The Danish National School of Performing Arts and graduated in 2003. Since then, he has appeared in numerous film and television productions in addition to directing his own short films. In 2016, Christian Tafdrup made his debut as a feature film director with Parents.

Director, actor and screenwriter Lotte Andersen had her breakthrough as an actor in the original Nightwatch by Ole Bornedal in 1994. Andersen made her own feature debut as director with Oh Happy Day in 2004 and documentary debut with Songs from Ilulissat in 2010.

Since co-founding M&M Productions in 1995, Kim Magnusson is a four-time winner of the ultimate award: An Oscar. Among other things, Kim Magnusson has served as president for the Danish Film Academy and The Danish Producers Association.

Screenwriter Adam August is a graduate of The National Film School of Denmark and John Trubys Writing Studio in LA. He won a Robert, a “Danish Oscar”, for his script for Fenar Ahmad’s Darkland in 2017 and among his upcoming projects is Valhalla, which will premiere in the fall of 2019.

The Robert nominees for this year’s short film: Fiction / Animation must be found at OFF 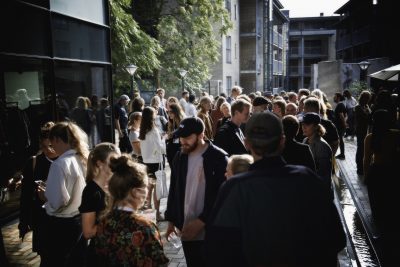