OFF – Odense International Film Festival has received a donation from the Spar Nord Fund of 125.000 DKK. The donation will be used for a series of talks during OFF18, where the audience can experience interesting film professionals discussing the art of film.

Since 1975, audience has experienced short film from all over the world at Denmark’s oldest and only Oscar-qualifying film festival. OFF18 will be no exception – almost 3000 films from more than 100 countries have been submitted to the competition. The festival also offers a variety of masterclasses, concerts, workshops, debates, programmes for kids and youth – and not least the Talks, which are supported with 125.000 DKK by the Spar Nord Fund.

The Talks were first introduced last year at OFF with big success. The audience experienced acknowledged film professionals, discussing short film and love, ambitions and motivation, and the role of film in society – all in a cosy and intimate atmosphere.

– We think the OFF Talks sound like an interesting project, which will be exciting to develop further for the benefit of all guests at OFF18, says Jesper Fruerlund, director of Spar Nord Odense.

The 125.000 DKK from the Spar Nord Fund means, that OFF can explore and develop the concept of the Talks at the festival. It enables the festival to invite interesting and relevant professionals from the film world to Odense, og this pleases Festival Director and Head of Programme, Birgitte Weinberger:

– We are simply so happy and proud of this very generous donation from Spar Nord. The Talks at OFF are a natural development of the values of the festival, where we constantly strive to expand our horizon and explore each other and the world we live in. Conversation and intimacy are key values central to OFF, and we are looking forward to presenting the Spar Nord Talks this August. 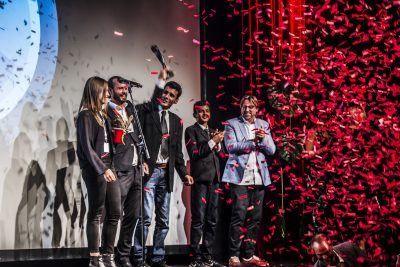